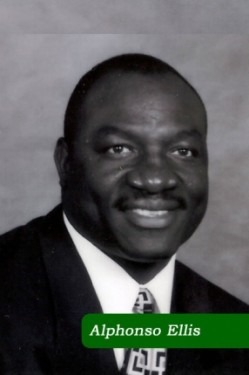 Alphonso Ellis was an enthusiastic, fun loving, good natured, outstanding man who had an enormous impact on everyone. HIs friends, his teammates, and his coworkers would tell you he was very talented and extremely strong, both physically and affectionately. People were just drawn to this muscular, smiling, happy man. Teammates, friends, and coworkers will testify to the fact that "a few minutes with Alphonso was good for the heart and soul".

While in high school Alphonso accomplished the following:

He was named one of the top 11 college prospects in the state of Georgia following his senior season at Thomasville High School. Alphonso was awarded a scholarship to the University of Georgia where in 1987 he became one of the very few true freshman ever to start for a Vince Dooley coached UGA football team. He played in 42 games while at UGA and was regarded as one of the very best blocking backs ever at the university. He will be forever remembered for many things but his "Bulldawg Bark" was legendary. After graduation from UGA in 1992 with a Bachelors in Marketing, Alphonso moved to Texas where he became a police officer with the City of Dallas in 1995. On March 21, 2003 Alphonso left us after a courageous 3 year battle with cancer. To quote from his obituary "he contributed to the happiness and joy of those in which he came into contact. He was an inspiration of faith, strength and love for his family, friends, and church". He was a definite role model for our youth.

Have you had a positive experience with Alphonso Ellis? Click here to tell us about it!