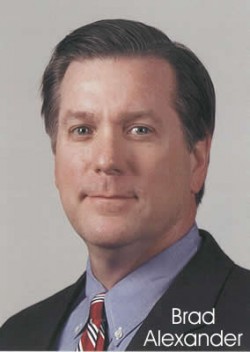 To say that Brad Alexander did it all while he was at Brookwood School would be an understatement of his achievements. During his junior year, the Warriors were State Champions in football with a team record of 13 wins and 0 losses. Brad was the starting tailback and also played defense. He scored 21 touchdowns and averaged 13.9 yards per carry. In basketball he was a starting forward. In baseball he was All Region pitcher and first baseman. In tennis he was the region singles champion. All three Warrior teams were Region Champs, and Brad was All Region tailback, and All Region and All State safety. He had 23 touchdowns, and 1300 yards rushing. The basketball team was the 1976 State Champions, and Brad was honored by having his #21 jersey retired. The baseball team won the Region Championship, and Brad was All State and All Region first baseman. The tennis team won the Region Championship and Brad was the Region Singles champion. Brad received his BS degree from UGA, and MS degree from Georgia State. He has coached YMCA sports, and is an active member of his church. Today Brad channels his energy into his job as President of Flowers Bakeries, Inc. Brad is truly an example for young people to follow.

Have you had a positive experience with Bradley Kevin Alexander? Click here to tell us about it!