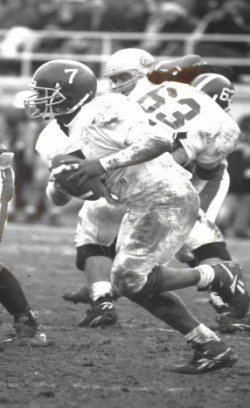 The quarterback of the Thomasville Bulldogs state championship team that went 15-0 in 1988, Charles Bostick lettered in football, baseball, basketball, and track. Named All-Region and All-State quarterback, he was also named to the Atlanta Journal-Constitution “Super 11” team.

He was offered a scholarship to Georgia Southern University, where he was redshirted in 1990. Bostick would take over the starting role of running the Eagle triple-option offense in 1991 by beating out two seniors for the quarterbacking job, and then in his sophomore and junior seasons led GSU to the playoffs, where they reached the quarterfinals. Injured and redshirted in 1994, he would return in 1995 as captain of the team to again lead the Eagles to the quarterfinals.

With his playing days now behind him, Bostick is still involved in athletics. He has coached YMCA football, basketball, and soccer and volunteered for numerous church projects in his hometown of Grand Prairie, Texas, where he works as the director of transportation and operations for Vantix Logistics.

Have you had a positive experience with Charles Bostick? Click here to tell us about it!