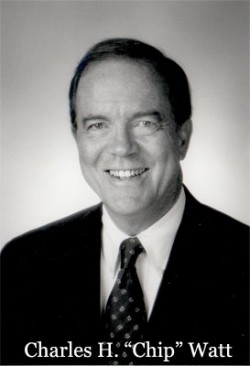 Charles H. “Chip" Watt, III, is the son of Charles and Julie Watt who at an early age instilled in him a depth of character that has been with him throughout his life. Against his wishes, his parents sent him to Episcopal High School in Alexander, VA, where he lettered in football, track and basketball. He became a campus leader, and on the football team he rushed for over 1,000 yards his senior year. He was given the nickname of “Country" since he was fond of saying, “Now this is the way we do things in South Georgia!" In track he ran the 800M, and was a member of the school’s relay team that set a Virginia state record that stood for years. Following high school, he chose Sewanee (The University of the South) where he was a four year starter at “blocking back" under Coach Shirley Majors (Father of Johnny Majors) in what was one of the last single wing formation offenses in the United States. Chip had a sure lock on being named All Conference as a defensive back his senior year until his season was ended prematurely with a serious knee injury. Chip hung up his cleats and went to Mercer Law School where he obtained his degree and began his career as a successful attorney. Chip’s commitment to 100% effort in athletic endeavors is surpassed only by his desire to serve his church and community. He has held various offices with First Presbyterian Church, Habitat for Humanity, Archbold Hospital, Archbold Medical Center, YMCA, as well as coaching youth sports where his “can do" attitude has influenced many young people.

Have you had a positive experience with Charles "Chip" H. Watt, III? Click here to tell us about it!