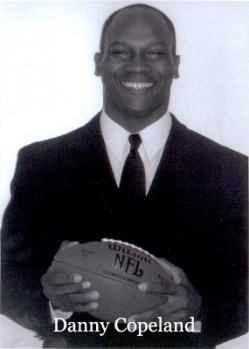 Danny Lamar Copeland’s life story is one of a small town boy who made good. However, his success in life is a result of dedication and hard work. “Danny Boy" was born and raised in Meigs, GA, and the youngest of three boys. He attended Thomas County Schools, and excelled in academics and athletics. At Central high School he participated in track and basketball, but he excelled in football where he earned All Region recognition. Danny was active in numerous school clubs, but dedicated himself to academics and football. After a long day at school and long football practices, Danny could be found propped up under a security light near the stadium doing homework while waiting to be picked up from practice. All this hard work resulted in his being named to National Honor Society as well as being an Honor Graduate with the Class of 1984. He was well liked by his peers who voted him as a Senior Favorite, and also Senior Superlative as the Most Outstanding graduate. Danny’s next stop on the road to success was at the University of Eastern Kentucky where he was All Conference for two years, and also Academic All American. Danny’s hard work paid off as the NFL scouts started noticing this South Georgia young man, and he was soon drafted into the professional football league where he spent the next six years. He earned a Super Bowl ring with the Washington Redskins, and was the Redskins’ Many of the Year in 1993. Danny returned home to Meigs where he started an after school program for the youth there. It has since evolved for the past six years into the Christ in Sports Foundation where he is both the founder and director. Presently 28 student athletes are participating in college sports as a result of his training and guidance. This equates to $1 million in college scholarships to our area youth! Danny Copeland makes a positive impact on the lives of individuals daily. He is a man who “walks the walk" in Thomas County.

Have you had a positive experience with Danny L Copeland? Click here to tell us about it!