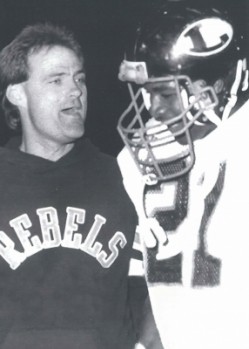 Doug Mills is a 1971 graduate of Central High School where he was a three-year letterman in football for the Yellow Jackets. After high school graduation, he attended the University of Georgia on a scholarship as a football manager and received a Bachelor of Science degree in Physical Education.

It was at this point that Doug took on the title of “Coach Mills” which would stay with him for close to 30 years. The son of late Bulldog coach Erskine Mills, Doug was born to work with young people. In 1975, Mills took his first football coaching job at Upson High School in Thomaston. The next year he moved on to R. E. Lee where he was a member of the coaching staff until the school closed in 1992. While at R.E. Lee, Mills served as an assistant coach on the 1988 AA state championship team that finished the season with a perfect 15-0 record. Mills’ distinguished coaching career featured one year as a Head Football Coach at Upson-Lee in 1995. But it was in the trenches as an offensive line coach and educator that Mills made his greatest impact on kids. According to sports columnist Jim Fowler of the Thomaston Times, Coach Mills made his reputation as a “tough, hard-nosed, no-frills, no-short cuts offensive line coach”. He created some outstanding offensive lines with players who would have struggled to contribute anywhere else. As an assistant, he coached on nine different region championship teams. He was recognized as his region’s Assistant Football Coach of the Year five times between 1986 and 1991. Off the field he was also honored as STAR Teacher of the Year in 1991. An excerpt from a nomination letter stated: “Doug has taught players and students that success has many different definitions, that although winning is important, it is even more important to develop one’s self to one’s full potential through hard work and honesty, always maintaining high moral standards”.

Coach Doug Mills has been a difference maker in the lives of thousands of young people. He is most deserving to be an inductee into the Thomasville-Thomas County Sports Hall of Fame.

Have you had a positive experience with Doug Mills? Click here to tell us about it!