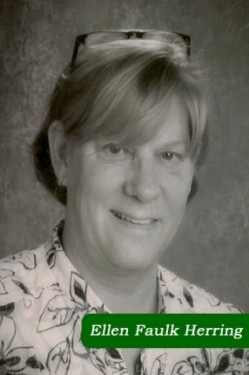 Ellen Faulk Herring was a member of the Thomasville High School girl's basketball team from 1971 through 1974 playing for coaches Dixon and Stephenson. Ellen played during a time when girl's basketball was making the transition from a 3 guard and 3 forward sport to one more similar to what it is today. That transition called for a new position to be created called a "rover". The rover position allowed a single player to play both guard and forward. Usually this player was the best on the team. Ellen filled this role for THS. Her prowess on the basketball court earned her the recognition as the most valuable player two of her four years on the team.

Ellen was also a member of the Thomasville High girls' tennis team playing doubles. While on the team, THS won region in both girls' singles and doubles. After graduation from high school Ellen attended Presbyterian College where she played on the tennis team her freshman year. Ellen has served her community by serving on the Special Olympics board, an organization that provides athletic opportunities for special needs children. She has also served as a counselor for Camp Venture. The majority of her time volunteering has been with kids with special needs. Ellen has also been involved with several YMCA programs including coaching and umpiring t-ball and baseball games. Her interest in the development of children can also be seen through her 33 year career as an elementary school teacher working with special needs children. She is definitely a positive role model for our youth.

Have you had a positive experience with Ellen Faulk Herring? Click here to tell us about it!