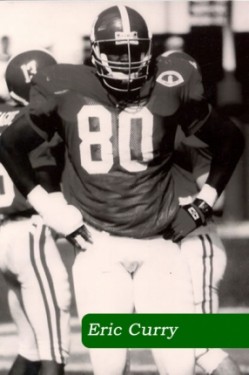 Eric played football and basketball at Thomasville High School. As a freshman at 6 foot 2 and 175 pounds he was not the imposing player he was about to become. Between his freshman football year and senior year he played free safety, cornerback, outside linebacker and finally defensive end. During this 4 year period he grew to 6 foot 6 and 220 pounds. He was awarded a football scholarship to the University of Alabama where he was an All SEC performer for 3 years and an All American his senior year. He was the 1992 UPI Lineman of the Year for all of college football. Upon graduation from Alabama, Eric was drafted in the 1st round (6th pick) of the 1993 NFL draft by the Tampa Bay Buccaneers. He played 7 seasons in the NFL for the Bucs, Green Bay Packers, and the Jacksonville Jaguars. While at Tampa Bay, Curry was named the True Value Man of the Year for community service. He was a member of the all Defensive Rookie Team at Tampa Bay in 1993. Eric has established a scholarship fund for the All Sports Foundation and the Eric Curry Foundation. While playing for the Jaguars he was a member of the NFL Ambassadors Association. Eric currently resides in Jacksonville where he is an instructor and trainer for premier athletes.

Have you had a positive experience with Eric Curry? Click here to tell us about it!