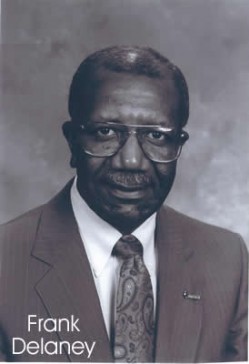 A longtime staple of Thomas County, Frank was originally a product of the Grady County school system. He graduated from Washington Consolidated High School, where he was a three-sport star. Delaney played basketball, baseball, and ran track. He also participated in the band and Glee Club dance troupe. Along with these activities he was an honor graduate. After graduating from Albany State College, he came to Thomas County to begin a 39 year career with the county school system, as a classroom teacher, Assistant Principal, and Principal at Thomas County Central High School. During this time he earned a Master of Education degree from Valdosta State College. This personable and highly respected leader was affectionately called “Papa D", not only by students but parents as well. Married to his high school sweetheart, Eunice, for 44 years at this writing, they are also grandparents of Delaney, Reginald, Jr., and Mikayla. As an active member of Ochlocknee Missionary Baptist Church Frank is serving or has served as Deacon, Sunday School Teacher, Financial Secretary, Groundskeeper, and Janitor. Frank has been recognized as the NAACP Man of the Year, Omega Psi Phi Fraternity Man of the Year, Thomas County Teacher of the Year, Outstanding Kiwanian, and winner of the Kiwanis President’s Prerogative Award and Legion of Honor Award for 25 years of active membership as a Kiwanian.

Have you had a positive experience with Frank Delaney, Jr.? Click here to tell us about it!