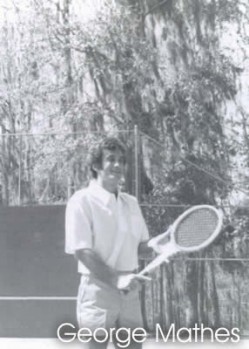 George is a 1964 graduate of Thomasville High School. While at THS he was a stalwart basketball and tennis player. According to his coach Jerry Studdard "He had the purest fluid jump shot of any player I ever coached". He was also known as a fine team player and the kind of player any coach would envy. He not only had the athletic skills to excel but was a very hard worker who never complained and did everything the coaches asked of him. These athletic skills were just as strong in tennis, as this son of Greek immigrants was a terror to his opponents on the tennis courts. This inherited tenacity was the misfortune to his opponents on the court. When his opponents would feel they had the match in hand they would only taste the bitterness of defeat when George would come roaring back with his ferocious serve and a slam at the net. George has been a coach of girls basketball teams at the Y, and a player/coach for the "Thomasville Hotdogs" a men's baseball team. He is known as a virtual historian of Thomasville Baseball, long having compiled volumes of information about the Georgia Florida Class D Baseball League. He has provided employment for many young high school students to assist them in earning an income to help their families. He has made numerous contributions to various athletic teams and players to assist them with their endeavors. A quiet person by nature who lets his past exploits and kind demeanor speak for themselves.

Have you had a positive experience with George Mathes? Click here to tell us about it!