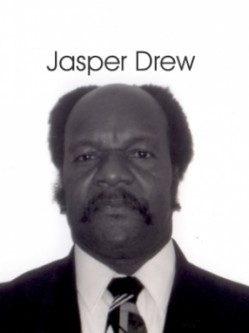 Jasper (Bud) Drew, Jr. is a product of the Thomas County School system. He attended Magnolia High School where he began his athletic career under Coach Charlie Ward. Bud had an outstanding football career and received many honors, among them being the Rookie of the Year in 1966 and Best Offensive Lineman in 1969. Together he and 1994 Hall of Fame Inductee Fred Ross formed a brusing left side of the Magnolia Offensive line. He went on to letter in three sports: Football, Baseball, and Track & Field. As a junior he was on the Relay Team that took second place in the state meet. His senior year he brought home another second place, this time in the Discus. While in school he was elected to the office of State FFA Vice-President in 1969. After high school he attended Fort Valley State University where he obtained a degree in Agriculture. He went on to obtain a Masters Degree in Agriculture from Tuskegee University in 1977 and a Masters of Education in 1978. He was tempted to forego his education in 1975 when he was invited to the Seahawks Training Camp, but was delighted to return home in 1981 when he was appointed as Principal of Douglas Elementary School.

Have you had a positive experience with Jasper Drew, Jr.? Click here to tell us about it!