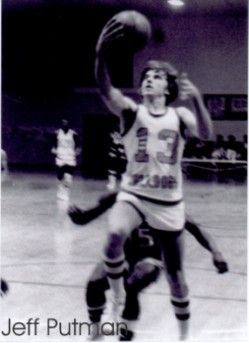 Jeffery Ralph Putman is remembered as one of the greatest basketball players to ever take the court at Thomasville High School. Today he is thriving in a new specialty as a nationally certified IBM professional in the IT specialist field in Atlanta. He is a devoted husband and father of two. While in high school, however, Putman set record after record during his three year stellar career with the Bulldogs. Putman, whose number 13 jersey was retired, set the school record for points in a career (1,698) and highest points per game average in a season (31.0). These are astounding numbers for a player whose career ended before the 3-point line was even implemented. Putman was a unanimous all-Region 1-AAAA selection his sophomore, junior, and senior years, and he was also a member of the Converse All American team and Basketball Weekly All American team. He was an accurate free throw shooter, and concluded his Bulldog career hitting 350 of 389 free throws which included sinking 61 in a row. Many of his records stand today. Jeff still enjoys basketball today but on a different level as he has coached basketball and baseball for children in the Atlanta area, and even finds time to play basketball in the downtown Atlanta lunchtime league. Jeff is truly a deserving member of the Sports Hall of Fame.

Have you had a positive experience with Jeff Putman? Click here to tell us about it!