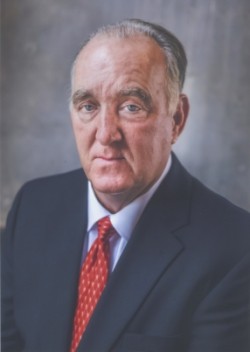 For decades, Jim Rayburn has been one of the most recognizable faces and voices associated with Thomasville Bulldog sports. A past president of the Touchdown Club, Rayburn has worked tirelessly to promote all Thomasville sports for decades. However, it is on the airwaves that he is best known as the long-time color analyst and statistician extraordinaire for the Thomasville Bulldog football broadcasts on WPAX radio, faithfully covering all home and away games for over 25 years and bringing the action of ‘Dog football into homes in Thomasville and Thomas County.

His thorough and accurate keeping of statistics for many area teams and individual athletes has won him admiration across the region, and he is widely regarded as the unofficial ‘official’ historian of Thomasville athletics.

A fierce competitor, Rayburn ran track for the Bulldogs while attending Thomasville High School. His red and gold legacy has been handed down to his family, as both of his sons played sports for the Bulldogs, including son Jeremy, who currently serves as a coach on the Bulldog staff. Jim and his wife Darlene reside in Thomasville

Have you had a positive experience with Jim Rayburn? Click here to tell us about it!