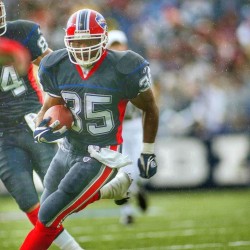 One of the best-known Yellow Jackets of all-time, Joe Burns was a leader on the 1994, 1996, and 1997 state championship football teams at Thomas County Central, starting as a wide receiver in ‘94 and later at the running back position. A two-time AAA Georgia Player of the Year, he graduated from Central as the all-time leading rusher in Yellow Jacket program history.

Joe would go on to play college football at Georgia Tech, where he was named All-ACC and finished his career fourth on the all-time Yellow Jacket rushing yardage list, and second in career touchdowns. He was recently inducted into the Georgia Tech Sports Hall of Fame.

After college, he would play four years with the Buffalo Bills in the NFL as a running back and special teams player.

His Rising Seniors Foundation has helped countless numbers of upcoming high school senior football players receive college scholarships as well as valuable lessons for finding overall success in life. He serves as president of the foundation.

After football, Joe has become a successful businessman as the President/CEO of Three Five Consultant Group in Atlanta, an international community-based group making improvements in communities all over the world.

Have you had a positive experience with Joe Burns? Click here to tell us about it!