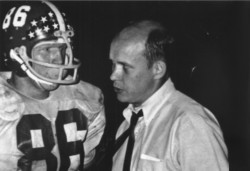 Born and raised in Thomasville, Joe Peeples was named his football team’s MVP his junior and senior seasons at Thomasville High. He was also a three-year letterman on the Bulldog baseball team, winning academic honors along the way as a member of the National Honor Society, of which he served as president his senior year. Joe also was awarded the Edwin T. Smith Award as a senior and the C&S Bank Scholarship award. A class AAA all-state honorable mention and member of the 1970 South All-Star Team, Joe signed a football scholarship with the University of South Carolina, where he would graduate with a B.S. Degree in Marketing. He was named one of the tri-captains of the Gamecock football team during his senior year.

After graduating from South Carolina, Joe embarked on a career in food service sales and management that has spanned over 29 years. He has worked for the Quaker Oats Company, Minute Maid (a Division of the Coca-Cola Company), Sam's Club, and now works for Cal-Texas Citrus Juice, L.P. covering the Midwest, portions of the South East and Mid Atlantic.

In 1987 he was selected an "Outstanding Young Man of America" recipient for service to others, civic and professional recognition and community activities.

Joe has been married to the former Robin Burkart for 32 years and they have two sons, Matthew and Jonathan.

Have you had a positive experience with Joe Peeples? Click here to tell us about it!