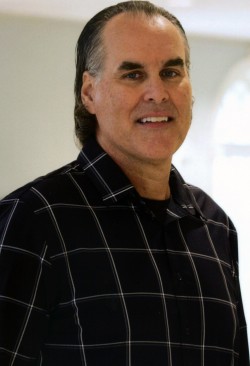 Joel Carter was the starting center for the Central Yellow Jackets football team in the 1980 & 81 seasons, named ‘Most Improved Lineman’ in ‘80 and 2nd team All-Region in ‘81 his senior season.

But it was off the football field that Joel truly excelled when he discovered speed walking. He took up walking a decade after graduating from high school, and in 1993 he won the Rose City Walk for the first of eight times. Competing against anywhere from 800 to 1300 walkers, Joel was the fastest Thomas County walker 12 times and set a course record at 24 minutes and 3 seconds in 1995, which still holds the distinction of being the second-fastest time in the 40+ year history of the Rose City Walk. He went on to compete in the Olympic speed walking trials held in Columbus in 1996, and would eventually come in 4th overall in the Georgia Games held at Georgia Tech.

Joel is also a talented singer. Through his work with the local band Root 3:16, he was part of raising over $100,000 for local charities and causes. He serves as a deacon at First Baptist Church and sings in the choir, many times singing solos.

Have you had a positive experience with Joel Carter? Click here to tell us about it!