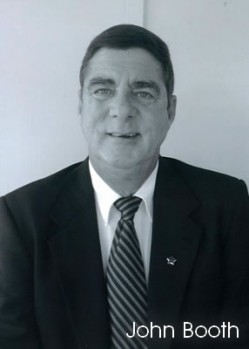 John Booth grew up talking football with Coach E.O. Garner. This exposure was enhanced when he became an assistant coach at Valdosta High School under the renown Coach Wright Bazemore. From 1970-1979 at VHS Booth's teams won 4 Region Championships, 2 State Championships and 1 National Championship in football. Booth excelled in the classroom where he was selected Teacher of the Year in Valdosta/Lowndes County in 1973. The VHS school annual the "Sandspur" was dedicated to Booth in 1974. Accolades continued to include Star Teacher 1975, State Coach of the year in tennis 1976, DAR Teacher of the Year 1977, member of the VHS Hall of Fame. Booth moved back to Thomasville in 1979. At TCCHS Booth's teams won 5 State Championships in Football, and his tennis teams won 17 Region Championships and 4 Final Four appearances. Booth was TCCHS Teacher of the Year, and State Finalist Teacher of the Year in 1991. John has been active in the community in his church as a member of the Administrative Board, Sunday School Teacher, Lay Minister, chancel choir and Stewardship Committee at First United Methodist Church. Booth was selected in 1996 as an Olympic Torch Bearer (one of 6) for Thomas County. John Booth has been and continues to be an exceptional role model for the Youth of our community.

Have you had a positive experience with John Booth? Click here to tell us about it!