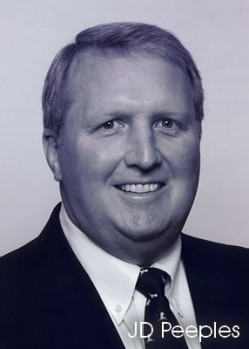 John David Peeples made his mark in Thomasville High Bulldog football history as a prominent member of the 1974 team that was voted by the National Sports News Service as the nation's National Champion. John David was born in February of 1956 and began his celebrated football career as the only 7th grader on the Douglas Middle School football 8th grade team. He continued to play during his 8th and 9th grade years and made it to the varsity team in 1972 where he was a three year letterman. Peeples was the only junior defensive starter his second year on the varsity team and led the team in tackles. That year, he received the Star Award for causing the most turnovers, fumbles caused or recovered, interceptions, sacks for loss and big hits. The defense set a school season record that year with 9 shutouts. The Bulldogs won back to back state championships his junior and senior years with Peeples playing an integral part in their success. Throughout college and during his working career, he has remained just as dedicated to exceeding expectations. Just one of many examples that could be listed is his being a catalyst in helping St. Judes Children's Research Hospital in Memphis raise over $3 million that paid for the renovation and expansion of the hospital's Blood Donor Center. John David currently resides in Collierville, Tennessee with his wife, Christina and they have three children.

Have you had a positive experience with John David Peeples? Click here to tell us about it!