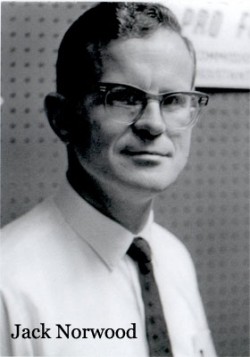 John E. (Jack) Norwood, II, was born and raised in Milwaukee, Wisconsin, where he played varsity basketball, baseball and football. He served in the navy during World War II where his ship was lost to enemy fire. When he returned home, Jack graduated from the University of Wisconsin where he played basketball in the Big Ten Conference. After graduation, jack and his bride, Bernice, moved to Thomasville where their two children were born. He taught math and science in the Thomasville School System, and also coached boys’ football and girls’ basketball. Jack worked summers at the Thomasville YMCA and attended classes at FSU earning his Master’s Degree. After receiving good YMCA background training from “Red" Milton, Jack accepted the Aquatics Director position at Jacksonville, Florida’s, YMCA, where he also volunteered his time to the American Red Cross and American Heart Association. He accepted a promotion to the SW Family YMCA in Miami where he worked until his retirement in 1993 at which time he and his wife returned to Thomasville. Jack did not stay retired long as he soon went to work for the Thomas County School System. He was an official for varsity basketball and football, and thoroughly enjoyed working with the youth where he always tried to bring out the best in his students. He was also active in the work of First Presbyterian Church. Jack Norwood was an active, involved member of the Thomasville sports community where he helped youth grow and develop. His exemplary life was an excellent role model for all the young lives that he touched.

Have you had a positive experience with John "Jack" E. Norwood, II? Click here to tell us about it!