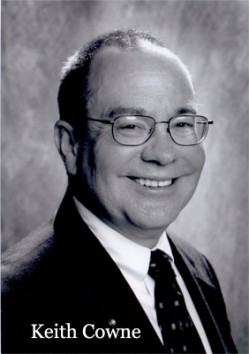 Keith Arthur Cowne moved to Thomasville his 9th grade year where he immediately became involved in many club activities and tennis at Thomasville High School. He played doubles his freshman year, and worked his way up to #1 singes in grades 10 through 12. He was named MVP his senior year. He was an Honor Graduate in 1970 and also a Senior Superlative. Keith’s personal and academic credentials were so impressive that he was given an appointment to the West Point Military Academy where he made the B squad doubles team. Keith left West Point in 1971, but completed his education at Valdosta State College and the University of Georgia. He entered the field of education as a teacher where he was Star Teacher twice. He quickly moved into the administrative field and is currently Superintendent of Madison County Schools. He has been actively involved with various organizations in the community, and in 2001 was named Georgia Association of School Superintendents’ Educational Leadership Outstanding Educator. Keith has touched many young lives and has been both a role model and father figure to those who needed this touch in their lives. He coached tennis and helped with football in Ocilla; he coached baseball at Washington-Wilkes High School as well as serving as an umpire for years in Little League. He coached tennis at Jackson High School when, as a principal, he couldn’t find a tennis coach. He was the drama coach and choral director in Ocilla, and assumed the drama coach responsibilities at Washington-Wilkes when an unexpected vacancy occurred. Keith Cowne has influenced a lot of people in his life through sports and education. However, probably the most important thing he has done is the way he has helped others develop a sense of self-worth, courage and perseverance to be the best that they could be in life.

Have you had a positive experience with Keith A Cowne? Click here to tell us about it!