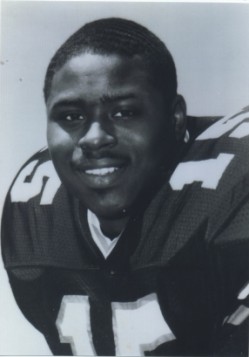 The captain of one of the most talented Thomasville Bulldog teams ever, Kenneth Wilson was voted All-State, All-Region, and All-Area as a defensive back in 1986. He was selected to play in the North-South All-Star game in Georgia. In that contest, he caught an interception and scored a touchdown. He was also selected to play in the Georgia-Florida All-Star game. Off the football field, Kenneth was also a member of the National Honor Society at Thomasville. Upon completion of his playing time at Thomasville, he was awarded a four-year full scholarship to attend Georgia Tech, where he would eventually become a team co-captain for the Yellow Jackets. For several years Kenneth held the weightlifting record at Georgia Tech for his weight division. As a Yellow Jacket, he was a three-year letterman and a two-year starter. After his college playing career ended, he tried out for the Washington Redskins, but was injured. After football Kenneth has worked with the Department of Veterans Affairs, assisting them in getting benefits, medical care, and housing. He also has assisted college graduates in applying and interviewing for jobs, as well as tutoring 6th through 12th graders in math.

Have you had a positive experience with Kenneth Wilson? Click here to tell us about it!