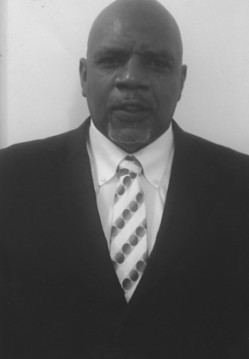 While attending DunlapElementary School, Larry McPherson says he was given the nickname “Bear” because he was a little chunky.

However, the nickname he earned as a child took on a new meaning once he strapped on the pads for the Thomasville Bulldogs. McPherson, a hard-hitting defensive tackle, was part of the 1973 THS state championship team that went 13-0 under Coach Jim Hughes. “Bear” and his Bulldog teammates only gave up a total of 55 points all season, including 9 shutouts. He was named to the All-Region team three times in his Bulldog career. A three-sport standout, he also lettered in football, baseball, and basketball for the Bulldogs.

After graduating from THS, he moved on to Fort Valley State College where he excelled as a two-sport athlete in football and baseball. A four-year letterman at FortValley, he was tabbed as All-Conference and All-American in both sports. In a single football game in 1978 he recorded 28 tackles, an interception, blocked a punt, and recovered a fumble!

Possibly the crowning honor of McPherson’s athletic career came in 1979 when his number 61 jersey was retired by FortValley. He is only the second player in FVSC history to have his jersey retired. NFL Hall of Famer Rayfield Wright is the other.

In 1979 Larry moved back home to Thomasville to teach and coach at DouglassMiddle School as well assist with the high school teams. During this time, Mr. McPherson formed the organization Pi Rho Psi at ThomasvilleHigh School which is an organization to help develop young boys into men. Before hanging up the cleats for good, McPherson played one season with the USFL‘s Birmingham Stallions in 1983 serving as their first defensive captain. Today he still resides in Birmingham, AL but has certainly not forgotten his roots in Thomasville.

Have you had a positive experience with Larry McPherson? Click here to tell us about it!