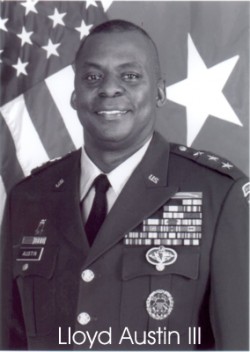 Lieutenant General Lloyd J. Austin III hails from Thomasville and received his education in the Thomasville School System. A 1971 graduate of Thomasville High School, Austin’s athletic career featured a brief stint in football but it was the hardwood where he shined. He was voted Captain of the 1971 Bulldog basketball squad under Coach Jerry Studdard. Never one to crave the limelight, Austin thrived on the “dirty work". He was a force inside as a rebounder and defender, using his wingspan to clog up passing lanes and have the advantage reach over opponents. In school classmates voted him for Senior Superlative, a testament to the respect he earned from peers. He went on to graduate from the United States Military Academy (West Point) and was commissioned as a second lieutenant in the Infantry in 1975. Now a 32-year veteran of the Army, Austin’s military career has been adorned with distinguished awards and decorations. He is now the rank of 4-star General. He currently serves our country as Vice Chief of Staff of the US Army. During the awards ceremony, it was said of Lieutenant General Austin that “Lloyd Austin is a great soldier, a great human being, and a great American". All of the background for these accolades had the humble beginnings in Thomasville, GA.

Have you had a positive experience with Lloyd Austin, III? Click here to tell us about it!