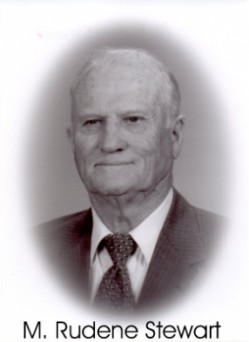 M.R. (Rudene) Stewart is a legend in Pelham, GA, but his roots are firmly planted in Thomas County where he grew up. He was a graduate of Ochlocknee High School, and earned secondary degrees from Abraham Baldwin Collage and the University of Georgia. He won first place for two years in Broad Jump and Shot Put at the district level, and first place in Broad Jump at state level while in high school. He was also the leading scorer in basketball. After graduation he played basketball and was a baseball pitcher for Abraham Baldwin College. After earning his secondary degrees, he coached a girls’ basketball team in the 40’s and 50’s, and was a referee for the Georgia High School Association during the same period of time. He also served as President of the Southwest Georgia Semi-Pro Baseball League. But it is his involvement in teaching agriculture and leading the FFA Club at Pelham High School that brings the most recognition to his name. For twenty seven years he influenced his students. From boys, he made men. As the Pelham High School’s FFA adviser, he took on many projects that helped the community, and his chapter won many awards. When he passed away in 2005, he had become a legend, and scores and scores of young men have gone out into the world and are enjoying rich, wholesome, and wonderful lives through the training and association with M.R. Stewart.

Have you had a positive experience with M. Rudene Stewart? Click here to tell us about it!