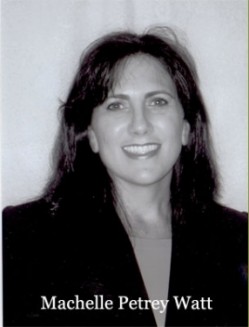 Machelle Petrey Watt is a third generation women’s basketball player. Her grandmother, Louise Freeman Petrey, was a member of the 1929/1930 Barwick Women’s Basketball team that was the runner-up to the state championship team. Her mother, Linda Martin Petrey, was the state tournament MVP when the 1960 Brooks County Women’s Basketball team won the state title. While Machelle was not as fortunate as they, she had an outstanding career. Machelle began her basketball career at Magnolia Junior High School and continued at Central High School where she was a dominant player, and she received several awards for her outstanding play. She was also a member of the CHS swim and track teams. Machelle’s achievements were not limited to sports only. She excelled academically and was Valedictorian of the 1984 CHS class. She was well liked by her peers as they honored her by electing her to several honored positions in various clubs as well as being Senior Class President. The Valdosta State Lady Blazer’s basketball staff recruited Machelle, and she continued her winning ways both on the court and in the classroom. She was named to the All Gulf South Academic Team while working hard to improve her basketball skills. During one practice, she made 100 straight free throws in a row! She was active in many student organizations and graduated Magna Cum Laude with the Class of 1988. Her greatest honor was receiving the prestigious Annie Powe Hopper Award given by the faculty to the outstanding senior student (not just an athlete) for the Class of 1988. Since hanging up her sneakers, Machelle has spent her time helping girls learn to love the game that has meant so much to her. She has touched many children’s lives through her selfless giving of her time and talents both as a coach for various sports at the YMCA, and at First Baptist Church where he has held many positions. She has lived an exemplary life so that those who follow in her footsteps will be on the right path.

Have you had a positive experience with Machelle Watt? Click here to tell us about it!