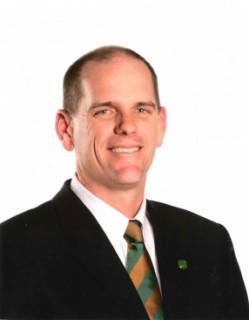 Mike Bobo was a three-sport athlete at Thomasville High. He competed successfully on the football, basketball, and tennis teams. He exhibited qualities that made him a natural leader. As quarterback he led his team to the post season three times compiling a 34-14 record. In the process Mike set numerous records at Thomasville High; most passing completions in a season (145), most passing touchdowns in a season (23), and most career passing yards (5,167). In 1992 Mike was selected the USA Today Georgia Player of the Year and the Atlanta Journal Constitution Region 1-AAA Offensive Player of the Year.

After graduation Mike attended UGA where he continued his outstanding play as quarterback for the Bulldogs. He currently ranks as UGA’s career leader in completion percentage (65%) and passing efficiency (155.8). In 1998, Bobo was selected the MVP of the Outback Bowl as Georgia defeated Wisconsin 33-6. During that game Mike completed 26 of 28 passes and at one point completed 19 passes in a row.

His understanding of the game and his ability to communicate with athletes made him a natural coach. After assistant coaching stops at Jacksonville State and UGA, Bobo was promoted to Offensive Coordinator for the Bulldogs in 2007. In 2015, Colorado State University named Bobo as their Head Football Coach. Bobo is currently in his second season as the Rams head coach.

Bobo continues to maintain ties to the local community returning on occasion to speak at various events. Not only will Mike Bobo go down as one of the greatest to wear the Bulldog red & gold, he impacts young people every day as a coach and mentor. All of these attributes make him a most deserving inductee.

Have you had a positive experience with Mike Bobo? Click here to tell us about it!