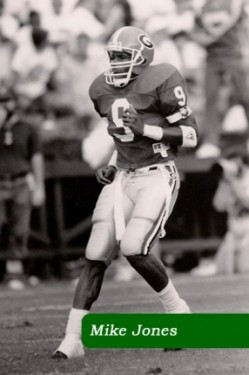 When watching Mike Jones compete in the athletic arena, it did not take long for even an untrained eye to see that he was a natural. His stellar athletic career while at Thomasville High in the late 1980's spanned all four years and included three different sports. Mr. Jones was a member of the track team, where he earned Region Champ status in the 4x100 relay in 1988 and 1989 and placed 3rd in the state in that same event in 1988. He was also Region Champ in 1989 in the 100 and 200 meter events and continued on as a state finalist in those events. Mike was also a three year starter for the boys' basketball team which was Region Champs as well as State Finalists in 1987. The sport that would carry him the farthest and earn him a college scholarship to the University of Georgia was football. While at THS, he was voted All-Region for two years and in 1988 was named one of the preseason Super 11 by the Atlanta Journal Constitution as well as a preseason All-American by Lindy's South. His most decorated year came in 1988 when he earned first team status as All Area, All Region and All Year by the Macon Telegraph.

Once a Dawg at UGA, Mike was a four year starter and was named to the freshman All SEC team in 1989. He was also named UGA Comeback Player of the Year in 1991. After graduation, Mike's interest in athletes and athletics continued. He was hired by the New York Jets as one of their strength and conditioning coaches. While in New York, Mike became aquainted with an evangelist and his World Changers organization. Mike's beliefs have led him to become an Ordained Minister and he is currently the Youth Pastor at World Changers Church in Duluth, GA. Mike leads his church as they reach out to their community assisting those in need. Through his church, Mike works to see that lives are bing changed through Christian ministry. A leader in whatever he chooses to do, Mike is a positive role model for our youth.

Have you had a positive experience with Mike Jones? Click here to tell us about it!