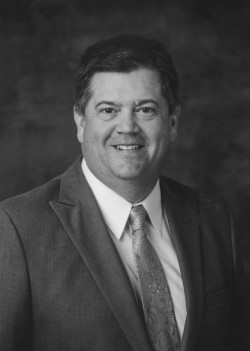 An outstanding student, Mike Owens attended Thomasville High School and was the top golfer in the Bulldog program in the late 1980's. During that time, the THS program was dramatically improving, and Mike played a key role in that improvement.

His junior and senior years at Thomasville, he was the number one golfer for the Bulldogs and also served as Team Captain. Leading the team quietly by example, his determination and competitiveness were always on display for his teammates.

Mike graduated THS with honors, and after graduating from Auburn University he returned to Thomasville. Over the last two decades, he has worked as the Golf Pro at Country Oaks Golf Course. Along with his duties at the golf course, Mike also oversees the local parks and recreation facilities for the City of Thomasville.

During his time at Country Oaks, Mike has performed great service for our community, including leading the course to win several awards and the organization of an annual golf camp for children every summer. In addition to the summer golf camps and golf instruction for area youngsters, Mike also makes the course available to high school and college players for practice.

Mike is married to the former Christy DeLoach of Thomasville and they have two sons, Ryan and Peyton. He is an active member of First United Methodist Church of Thomasville.

Have you had a positive experience with Mike Owens? Click here to tell us about it!