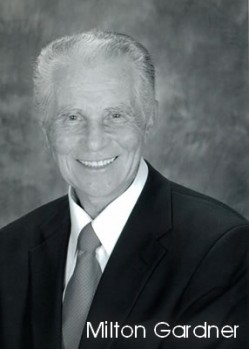 Milton C. Gardner, a man passionate about his calling to spread the Word, and a passion for athletic competition. He was born in Albany, Georgia in June of 1935 and was raised in Americus where he graduated from high school in 1953. While in high school, he lettered 3 years in football and 2 years in basketball. While in college at Mercer University, he participated in a number of intramural sports. In 1969 at the age of 34, he was called to be the pastor of First Baptist Church, Thomasville where he served for over 30 years. It was during this time that he has made his mark as an avid sports participant and supporter. With regards to supporting the local athletic programs, he served as the chaplain of the Thomasville High Touchdown Club and football team from 1970-2005. He has also served on the board of directors for both the Thomasville Touchdown Club and the YMCA. As far as a participant, he played on the First Baptist men's softball and basketball teams. But, he is probably best known for his dedication to the "Men's Noontime Bunch" at the YMCA where men 40 years and over gather 3 days a week to participate in friendly, yet very competitive basketball games. He has participated in this league for close to 40 years. Dr. Gardner and his wife Nancy have 4 daughters and 10 grandchildren.

Have you had a positive experience with Milton Cook Gardner? Click here to tell us about it!