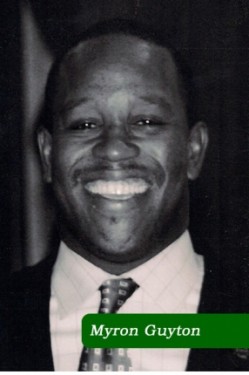 When looking over Myron Guyton's resume, it is easy to see he holds the athletic qualifications needed for induction into the Thomasville-Thomas County Sports Hall of Fame. After a stellar high school career in track and football, he enrolled at Eastern Kentucky University where he started at safety all four years. While there, the team won three conference championships, he was team captain for two years and was named MVP his senior year. His successes on the football field there did not go unnoticed and he was inducted into the Eastern Kentucky Hall of Fame. Drafted by the New York Giants, Myron Guyton started his first year which was the first time his coach, Bill Parcels, had ever started a rookie on the defensive side of the ball. In just his second year in the NFL, his team not only made it to the Super Bowl but was able to defeat the Buffalo Bills for the championship. With that win, Myron Guyton holds the title of being the first athlete from Central High School to win a Super Bowl.

Even with all of his successes in the NFL, Myron Guyton has found time to give back to the communities he has lived in. Myron has sponsored a local minor league baseball team, the Thomasville Sluggers, which his dad, Dave Guyton coached. He has also been involved in programs to help race relations in Thomas County such as the Dave Guyton Memorial Easter Egg Hunt. This event was held in Metcalfe and brought kids of different races together. He has financially supported Paradise Baptist Church to help with an addition to their church as well as supported their choir with the purchase of uniforms. After moving back to Thomas County, Myron has been involved in the community such as speaking to classes at Thomas County Middle School. He is a positive role model for the youth of our community.

Have you had a positive experience with Myron Guyton? Click here to tell us about it!