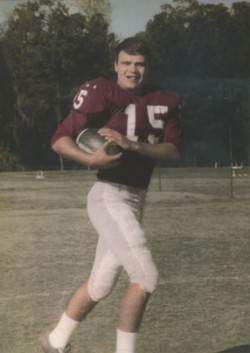 Lettering in baseball and football while at Thomasville High School, Phil Bradner excelled on the gridiron. A starter on both sides of the ball, he played running back, linebacker, and defensive back in leading his Bulldog team to an 8-1-1 regular season record and a region championship. Bradner would finish his senior season with nearly 800 all-purpose yards and 15 touchdowns.

He would go on to play college football at Presbyterian College, averaging 4.6 yards per carry while being selected as a captain in his senior season. Bradner was selected as the running back for the 1960's 'All Decade Team' for the Blue Hose.

After completing a stint in the Army with the rank of First Lieutenant, he would attend the University of Georgia to receive a Masters degree in Business Administration. He worked for 38 years with Colonial Foods, Southland Corporation, and 7-11 Corporation before retiring in 2012. Very active in community outreach and charity support including his current efforts for Meals on Wheels, Phil and Sheila, his wife of 42 years, have two sons and five grandchildren.

Have you had a positive experience with Phil Bradner? Click here to tell us about it!