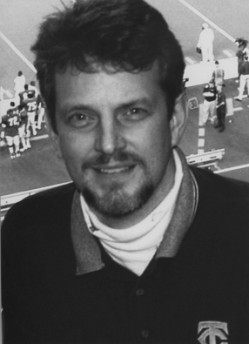 Randy Young has been the radio voice of the Thomas County Central Yellow Jackets for over 25 years. A lifelong fan of sports on the radio, after graduating from Central in 1981, Randy would attend Valdosta State College, where he would broadcast Blazer baseball, basketball, and football games before earning his bachelors degree in Broadcast Production in 1985. In 1986, the opportunity to broadcast Central's games on the radio opened up, and that would be his first season as "the voice of the Yellow Jackets."

Since then, he has been the voice of one of the most successful stretches in Georgia high school football history. Randy has called nine Yellow Jacket semifinal games and six state championship games on the radio, five of which were Central victories. His distinctive style helped shape the legends of Central standouts such as Charlie Ward, Jr., Johnny Cooksey, Joe Burns, Erik Walden, Amp McCloud, Debrale Smiley, Ray Drew, and countless other Yellow Jacket players. Randy has also called ten games from the Georgia Dome, including being selected by the Georgia Radio News Network to provide play by play for the statewide broadcast of the 2010 class AAAA state championship.

He has been the director of the broadcast & video production department at TCCHS since 1995. During his tenure Randy has had students from the TCCHS program actively involved in the radio and television broadcasts of Central football, both videotaping and editing the games for rebroadcast as well as producing the award winning "Yellow Jacket Tailgate Show" on the radio every week during football season.

A published author of Confederate history, in his spare time Randy enjoys spending time with his family, as well as playing his guitars and working in the yard. He and his wife, Risa, have two children, Marion Rose and Ransom Lee. They are active members of First Baptist Church in Thomasville, where Randy serves as a deacon.

Have you had a positive experience with Randy Young? Click here to tell us about it!