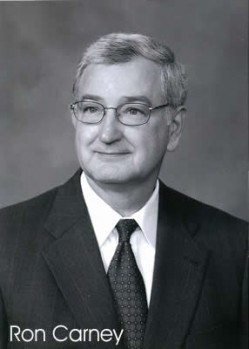 Ron Carney is truly a quality example of a home town boy who made good. He began his athletic career in the Y leagues, and then moved to THS where he excelled in three sports. However, it was in football that he truly left his mark on this hometown. In the 9th grade Ron was made quarterback of the football team in the middle of the season, having been noticed by the coaches because of his character, intelligence, leadership and outstanding physical ability. He remained the Bulldog quarterback for 3 ½ years leading them to two South Georgia Championships and compiling a 34-9-3 record. His awards include being selected as an Honorable Mention All State quarterback both his junior and senior years, most valuable back, captain of the 1967 team, and the first recipient of the J.K. Harper Sportsmanship Award which is awarded on the basis of character, scholarship and ability. After graduation Ron accepted a four year football scholarship to the University of Richmond. Ron not only played football in Richmond, but was also president of the senior class and a Dean’s list student. Ron holds a Masters and Doctorate degree from Nova Southwestern University. Like many hometown boys, Ron married his high school sweetheart. He serves as a deacon in his church, and is the VP of Administration at Southwest Georgia Technical College.

Have you had a positive experience with Ronald E Carney? Click here to tell us about it!