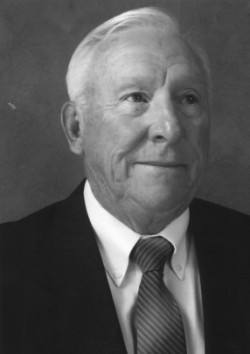 Ron Reeves was a well-rounded athlete during his high school years as he lettered in four sports at Thomasville High - football, basketball, baseball and track. As a senior in 1957 Reeves was a major contributor on Coach Erskine Mills’ Bulldog team that finished 9-3 as region champions. His abilities on the football field were recognized when he earned All-State honors in 1957. Weighing in at only 125 pounds, he excelled while playing on both sides of the ball.

His involvement with sports did not come to an end after high school. In fact it was just the beginning. After serving his country in the Army for four years, he returned to Thomasville where he began making numerous contributions to athletics in the community. In the 60’s and 70’s Mr. Reeves, along with others through the YMCA, were instrumental in bringing slow pitch softball leagues to Thomasville. Since those beginnings, slow pitch softball has continued on today with summer and fall leagues as well as co-ed leagues being introduced a few years back. Reeves also played a key role in getting softball fields built for the citizens of Thomasville.

In addition to these contributions, Mr. Reeves has volunteered countless hours to the youth of our community. For 25 years he officiated in the Georgia High School Association and also coached youth little league baseball for the YMCA. His love for sports has never stopped as he continues to compete today on the golf course. Seeking none of the recognition, Ron Reeves has proved himself to be a significant contributor to the athletic tradition of our community while serving as a positive role model for our kids

Have you had a positive experience with Ronald Reeves? Click here to tell us about it!