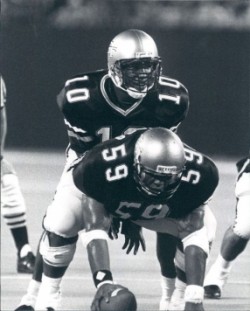 Shawn Jones made his mark as an outstanding football player not just in high school, but on into college where he led his team to the pinnacle of the collegiate national championship. Shawn played his high school ball at Thomasville High School where he played under the guidance of fellow Hall of Fame inductee, Coach Mike Hodges. During his time playing high school ball as the starting quarterback, Shawn led the Bulldogs to a 29-8-1 record, including an 11-1 record as a senior. A three year starter, as a senior he completed 67 of 125 passes for 1,369 yards and 11 touchdowns. He also rushed for 677 years and three touchdowns.

Shawn went from being a Bulldog in high school to a Georgia Tech Yellow Jacket in college. His success as a quarterback continued there, setting several Yellow Jacket and Atlantic Coast Conference records. His career total of 9,296 total offense eclipsed the ACC record at that time which ranked 11th in NCAA history. Shawn had an outstanding freshman season en route to earning the ACC "Rookie of the Year." He finished his career as the winningest quarterback in Georgia Tech history with a record of 31-14-1. The highlight of his college career came when, in 1990, he led the Yellow Jackets to the National Championship. Outside of participating as an athlete, Shawn has given back to his communities by volunteering his time as a coach for midget football league, working with youth basketball and football groups, as well as speaking at youth church groups.

Have you had a positive experience with Shawn Jones? Click here to tell us about it!