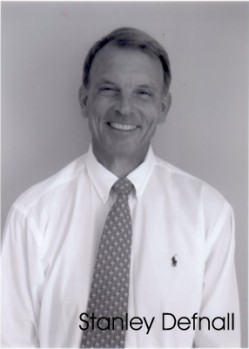 Stanley Hays Defnall is a life long resident of Thomasville and Thomas County. His sports career began, like most others, in the YMCA youth baseball and football programs. His career continued at Thomasville High School where he was a three letter athlete, lettering in football, baseball, and track. From there he continued his baseball career at Abraham Baldwin College where he maintained a .300 plus batting average. College was not the end of Stan’s athletic career. After college he became a star athlete and home run hitter with several highly competitive adult softball teams. In 1976 and again in 1981 he was a contributing member of National Softball Championship teams. Tragedy nearly ended his life and sports career when he severely injured his left arm in an accident at his asphalt plant. Not to be deterred by this injury, he worked tirelessly and endlessly to regain sufficient use of his arm to allow a brief return to softball. After leaving the softball field he took up tennis where he became a very competitive player as well as the Glen Arven Country Club men’s champion. Stan’s pursuit of sports has brought him into contact with youth sports at all levels which he supports both financially and personally. Stan’s enviable sports career and his quiet behind the scene involvement in many projects of our community are what make him a perfect member of the Sports Hall of Fame.

Have you had a positive experience with Stan Defnall? Click here to tell us about it!