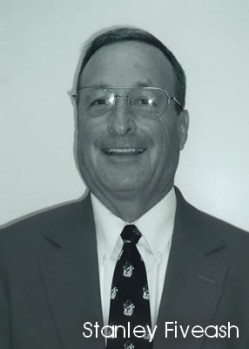 Stanley L. Fiveash was born in Atlanta, Georgia in January, 1954. At the age of 6, he and his family moved from Atlanta to Thomasville, and according to him, was "getting out at just the right time". Stanley attended Thomasville High in the early seventies, where he played football under Coach Jim Hughes. He was the defensive captain for the Bulldogs during the 1971 season. Coach Hughes once remarked that "Stanley was small, but he was slow". Once into his adult life, Stanley has remained extremely involved and has served in many different capacities in local organized sports. He has served on the Thomasville/Thomas County Recreation Board, he played and coached men's church softball for 20 years, umpired women's softball for 3 years and coached girl's softball for 11 years. Probably his greatest contribution has been his involvement and work as an official in local and area sporting events. For 29 years he has officiated in the Albany Association of officials and for 30 years officiated and worked with the YMCA football program. For the last 11 years he has coordinated the referees for the YMCA football leagues. Outside of the realm of his sporting world, Stanley is extremely involved at First Baptist Church where he serves as a deacon and is co-chairman of the ushers. His wife, Deborah, teaches at Thomas County Middle School and they have a daughter, Stacy, who teaches at Jerger School.

Have you had a positive experience with Stanley Lewis Fiveash? Click here to tell us about it!