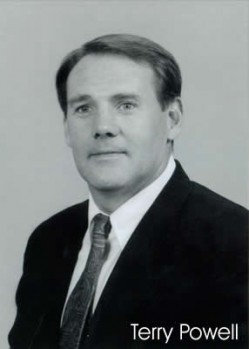 Terry Powell is a product of the Pelham School System where he graduated in 1964. After graduating from Georgia Southern, he coached in several schools before taking a job on Jim Hughes’ staff at THS in 1977. In the spring of 1983 after Coach Hughes’ departure it was assumed by the bulldog faithful that Coach Powell would be next in line for the job. Applications poured in from all over the state, several coaches were interviewed. Coach Powell quietly withdrew his name from consideration, stating that he wanted to spend more time with his family. During the spring as the search continued Coach Powell turned down the request of the administrators three times. After the third refusal the administrators kindly told him it was his duty to take the job as the kids couldn’t go through the summer without a head coach. This dedicated assistant had no choice. He accepted the task. Not many athletes, a reluctant head coach, and a murder’s row schedule waited. But Terry Powell was not a loser! He and the team went to work. They rallied behind the words of their humble, unsuspecting head coach who told them he believed in them. They won 7 games in the regular season and made the playoffs. Nobody could believe it except those kids and those coaches. The season was a success! Coach Powell stepped down and became a builder of athletes at Harper, Scott, Jerger and Balfour as a Physical Education Teacher. Terry Powell is truly a positive role model.

Have you had a positive experience with Terrell Kent Powell? Click here to tell us about it!