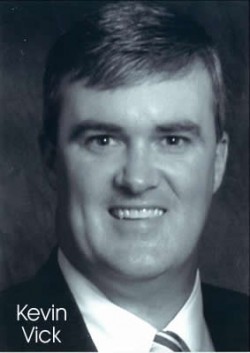 Kevin began his athletic career playing Midget Football in the YMCA program. Kevin won both the Heritage One Mile Run and the Rose City One Mile Run setting a record that stood for many years. Kevin continued his football career at Douglas Middle School where he was an outstanding running back. Kevin transferred to Brookwood School his freshman year. He was a four year starter for the Warriors, and was named to the All Region team as a sophomore in 1983, 1984 and 1985. He was also named to the All State team in 1985, the same year he broke the Brookwood Single Season Rushing Record by running for 1,662 yards. TV station WTXL named Kevin as this area’s Player of the Week in 1985. Brookwood bestowed on Kevin one of the highest honors a school can present an athlete by retiring his #23 jersey in 1985. He was an outstanding center fielder for the Brookwood baseball team, and was MVP in 1985. He was also a valuable member of the Brookwood basketball team, and his athletic versatility resulted in his being named the school’s Most Outstanding Senior Athlete in 1985. Kevin attended Liberty University on a football scholarship. After a year he was given a chance to transfer to Mercer University in 1986, where he played baseball and graduated in 1989. He is active in the service of his church and the local Fellowship of Christian Athletes.

Have you had a positive experience with Thomas Kevin Vick? Click here to tell us about it!