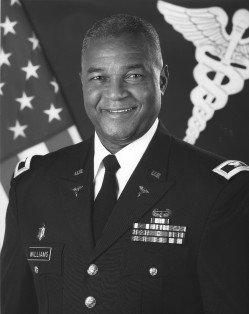 As part of the graduating class of 1982 at Central High School, Ronald “Todd” Williams was already firmly established as a leader on and off the field of competition. On the football field, he played tight end for the Yellow Jackets under head coach Larry Green.

A two-sport star during his high school career, Todd also excelled at discus, where he was undefeated in every meet he attended his senior season of competition, eventually representing Central at the state meet. He also excelled at shot put, winning all but one of his meets during his senior year, and represented the Yellow Jackets in that event as well at state.

Todd would eventually earn a football scholarship offer from Florida A&M University, where he started his entire career at tight end. As in high school, he was elected team captain by his teammates for his senior season.

After graduating from FAMU with his degree in pharmacy, Todd joined the United States Army, where he has served as Chief of Army Hospital Pharmacies for over 24 years at seven different installations including Germany and South Korea. He currently serves as Deputy Commander for Patient Services at Eisenhower Army Medical Center at Fort Gordon in Georgia.

Todd has also volunteered many hours of time mentoring at-risk young men during his time of service.

Have you had a positive experience with Todd Williams? Click here to tell us about it!