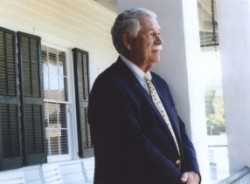 As a multi-sport athlete at Valdosta State College, Tom ‘TJ’ Johnson was voted the Most Valuable Player on the Blazer baseball team in 1963 and was named the Best Defensive Player on the basketball team at VSC in 1965. After beginning his teaching and coaching career at Ware County, in 1972 Johnson would come to Thomasville to coach basketball, baseball and golf at Brookwood School, as well as assisting with the football team. His basketball teams won several regional championships and won a state championship in 1977. Johnson's basketball teams at Brookwood sported an 80% winning percentage. He would eventually become Headmaster at Brookwood. Johnson would move on to teach and coach golf at Gatewood School in Eatonton where his teams would win several state championships. He is a member of the Georgia Independent School Association Coaches Hall of Fame and is also a member of the Valdosta State University Hall of Fame in two sports. A winner of numerous civic and social awards, Johnson continues to be a leader for his hometown of Daphne, Alabama.

Have you had a positive experience with Tom Johnson? Click here to tell us about it!