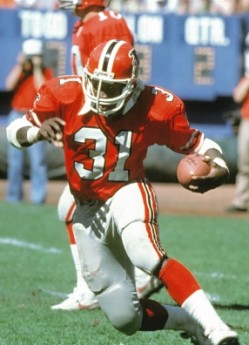 William Andrews undoubtedly is the most prolific running back to have played at Thomasville High School and in the pros. He attended Auburn University and was drafted in the third round of the 1979 NFL draft (79thoverall) by the Atlanta Falcons. At THS Andrews still holds the following records: most yards in a season (1,690), most yards in a career (4,339), most touchdowns (61), and most points in a career (374). Jim Hughes, William’s high school coach stated that William was well respected by his teammates but they hated to practice with him “because he practiced as hard as he played on Friday night!”

At Auburn, Andrews’ role was mostly as a blocking back but he still tallied 1,347 total yards in three years. His career with the Falcons included 5,986 total rushing yards on 1,315 attempts or 4.6 yards per carry. He also caught 276 passes for 2,645 yards for a total of 8,702 combined yards - still a Falcons record! He scored 41 career touchdowns with the Falcons (30 rushing and 11 receiving). He also played in four Pro Bowls. Ronnie Lott an all-pro performer for the San Francisco 49ers and ten-time Pro-Bowler once said the “hardest hit I ever received in all my years in the pros was the time I tried to make my best form tackle on William Andrews”.

From a community standpoint William is active in his Atlanta-area church currently serving as the President of the men’s choir. William has been active in other community activities in the Atlanta area including the Heart Association, March of Dimes, Diabetes Association, Boys and Girls Club, and an Honorary Member of the Governor’s Council on Developmental Disabilities. William Andrews obviously excelled from an athletic standpoint and now is giving back to his community and church as an excellent example for the youth of his community.

Have you had a positive experience with William Andrews? Click here to tell us about it!