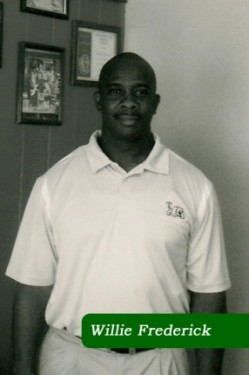 Wille played football at Thomasville High School in 1984, 1985, and 1986. Willie played the linebacker position on defense. In 1985 and 1986 if you watched Thomasville High School football you could always discover who on the opposing team had the ball because there were some violent, horrific collisions between the ball carrier and #57 Willie Frederick. And yes, when the play was over Willie was helping the ball carrier to his feet smiling about the upcoming play. This human missile in a football uniform was 1-AAA All Region in 1985 and 1986, 1-AAA All State in 1986 and 1-AAA Defensive Player of the Year in 1986. Coach Mike Hodges said Willie was "pound for pound the most dynamic player I ever coached".

At a time when mentors are sometimes hard to find, Willie Frederick provides energy, excitement, and a positive Christian attitude for our youth. He is an unselfish, giving person to all. He is an FCA leader, active at his church, volunteer coach at Thomasville High School, and the 2011 Spirit Award winner at Flowers Baking Company where he is employed. He is certainly a role model for the youth of our community.

Have you had a positive experience with Willie Frederick? Click here to tell us about it!