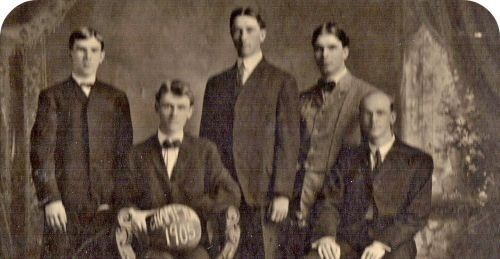 History of the Thomasville YMCA

On May 7, 1903, a meeting was held at the Presbyterian Church in Thomasville, for the purpose of organizing a YMCA. Ten days later the Thomasville "Y" was officially organized. Mrs. Bertha Wann deeded her property at the corner of Hansell and Warren Streets to the State YMCA, who in turn deeded it to the local YMCA. Within 6 months membership had grown to 158 men and boys, and attendance at the "Y" activities totaled 3,278 for the half year. Like Thomas Sullivan, who founded the YMCA in America, the founders of the Thomasville YMCA imagined a movement devoted to putting Christian principles into practice through programs that build healthy spirit, mind and body for all.

A decision was made to raise funds to build a new YMCA building at the corner of Dawson and Jackson streets. On October 13, 1904, the YMCA moved into its new building, a two story frame structure which was equipped with a gym room. In 1913 a brick building was constructed at a cost of $13,000, over the old wooden structure. The main feature added was a gymnasium, along with several dormitory rooms. Over a period of years the building was remolded, but never with any facilities being added. It was only through the sacrificial giving of time and money by its members that the YMCA managed to stay open through the early years of its history in Thomasville. As late as 1933 in the very depth of the depression, at one of the Board meetings, a motion was made to close the YMCA due to lack of funds, but it was the belief in the purpose of the YMCA that impelled the Board to defeat the motion and carry on.

In 1945, the Francis F. Weston center was established on Clay Street to offer swimming lessons for the black community. That facility was instrumental in offering children and adults in the community many valuable programs.

As Thomasville grew, the "Y" grew and the need for better facilities grew. In 1950 the citizens of Thomasville began raising $103,000. Two additional drives took it over the goal of $242,000. With the acquisition of the Evans property next door for needed room, construction began. In 1957, the W.R. Milton Center was built in its present location. The name of the facility honored W.R. "Red" Milton for his years of service as Director of the Thomasville YMCA from 1934 until his retirement in 1975.

In 1975, 18 years later, the Y was again at the crossroads on facility expansion. Through the efforts of progressive and forward-thinking members of the YMCA Board of Directors and the General Director, W.R. "Red" Milton, property had been acquired along Dawson Street and Seward Street for expansion purposes. The decision was made to launch a capital campaign for $1.2 million which would provide new and altered facilities for more expanded delivery of services to the community, particularly broader- based adult facilities and programs. Challenged with a theme of "Let's Make a Good Thing Great", the community responded and successfully met the goal. In the year 1978, the renovation of the Milton and Weston Centers were better able to meet the ever growing needs of the community in which it had served for 75 years.

In 1986, a childcare building was constructed and later expanded in 1995 to meet the growing needs for parents in our community. Our After School Child Care provided services for hundreds of children during the school year, picking up children from many schools and public kindergartens. During the summer months we provided full day care for working parents.

In March of 1999 the City of Thomasville and Thomas County governments contracted with the YMCA to provide the recreation programs for Thomas County. This resulted in an increase of the YMCA's program base as we included the county communities in the total recreation program. The YMCA now runs all of the sports programs and community events for the entire county, including senior citizens, special populations and special events such as the Rose City Run and Christmas parade. This arrangement has proven to be beneficial for all parties.

In 1999 the YMCA Board of Directors embarked on a Major Capital Campaign to raise $8.5 million over a 5-year period to build a youth facility on Remington Avenue, and to renovate both the W.R. Milton and Francis F. Weston centers. Under the campaign leadership of Powell Jones, and the overwhelming support from the people of Thomasville, the funds needed were raised in 6 months. An anonymous donor gave a multi-million dollar, two for one matching gift in honor of the long friendship of the Butler and Mason families. This gift helped assure the success of the YMCA Capital Campaign dream. In January, 2002, the new center was completed and named the Butler-Mason Center in honor of these two established and historic families. Features of the facility include:

The Y Child Care center has responded to the needs of our families as we work together to raise our children and care for each other. Our working parents rely on the Y to pick up children at school for after school care and to offer spring break and holiday activities on school holidays. During the summer months the YMCA has over 1500 children in day camp and another 6000 in their summer meal program. Every day there are over 350 in child care and the Child Watch program serves 300 families whose children are too young to attend school.

The Francis F. Weston Center also serves the community with both a full day and after school childcare program. On weekends, the renovated facility may be rented for various community activities and during summer months, the outdoor pool serves as a public access pool. The center is equipped with a basketball court, swimming pool and outdoor play area.

On October 29, 2002, the name of the W.R. Milton YMCA was officially changed to the Everett-Milton Center. The new name honors George Everett for his years of service to the YMCA, beginning in 1959. Mr. Everett served as Director from 1975 until his retirement in 1995. Both "Red" Milton and George Everett were outstanding YMCA leaders and dedicated community servants. The recently renovated Everett-Milton Center is located at 103 S. Dawson Street. Features of this facility include:

For Thomas Sullivan, the founder of the YMCA in America, strength of body meant little without strength of character. It was this same progressive spirit that later stirred the hearts and minds of the founders of our YMCA, and has continued on through the thousands of volunteers that have served in our Y. In the long view of history, it is doubtful any establishment has meant as much to Thomasville, and to the tens of thousands of men, women, boys and girls who have participated in YMCA activities over the years.

Certainly the Thomasville YMCA has evolved and expanded with the decades. We are proud to look back and see that our mission is as strong now as it was in 1903. We couldn't have accomplished all of this without our volunteers. Many men and women served the "Y" during all these years, giving unselfishly of their time and effort to keep the organization going to the benefit of the entire community. And this continues today. A tally of volunteer hours showed that more than 95,000 hours given annually by community volunteers to our YMCA.

Today, over 100 years later, the Thomasville YMCA is stronger than ever thanks to the people of Thomas County. We are firmly committed to the traditional values of caring, honesty, respect and responsibility and will continually strive to promote these values within our Y. In a fragmented world, the YMCA serves as a cohesive force bringing individuals together that are firmly committed to making a difference in the lives of our children, our families and our community.